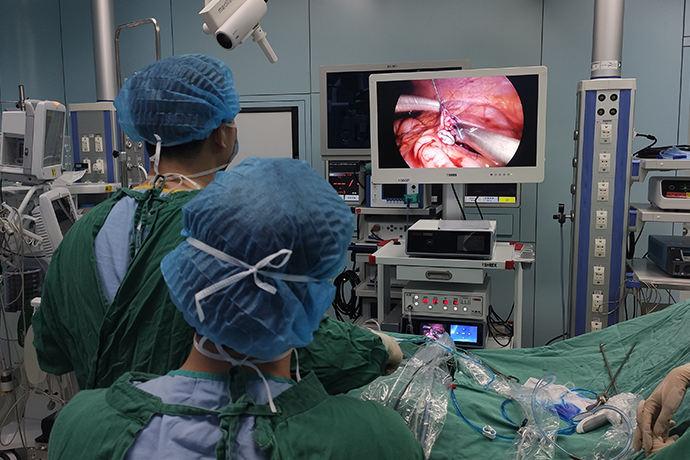 (1)Surgical position: ① Generally, supine position with head high and feet low; ② Whether the patient’s lower extremities are separated can be determined according to the surgeon’s standing position, his own experience and habits; ③ For tumors in the right anterior lower segment or right posterior lower segment of the liver, the patient can use the left side. Lateral position.

2. Intraoperative Ultrasound: During partial liver resection, intraoperative ultrasound is necessary. With the help of intraoperative ultrasound, the missed lesions before operation can be found; the tumor location, boundary, presence or absence of sub-focal lesions can be further identified, the relationship between the tumor and the surrounding ducts and the blood vessels on the tangent line can be understood; it is helpful to identify and mark the pre-tangent line.

3. Dissection of liver parenchyma: If the tumor is located on the surface, mark a pre-cut line 1-2 cm from the edge of the tumor; if the tumor is located in the deep part, it is difficult to cut vertically from the liver surface. There is sufficient incision at the base. The liver parenchyma is severed with an ultrasonic scalpel and other liver cutting instruments, and the direction of the cut is maintained. If necessary, intraoperative ultrasound guidance is used to ensure the basal incision margin. In case of large duct tissue, absorbable clips or titanium clips can be used before cutting. To reduce hemorrhage from hepatic venous stumps in liver sections, low central venous pressure techniques can be used.

1. Exploration and liver dissociation: The round ligament, falciform ligament, left deltoid ligament and left coronary ligament were severed in turn. If there are large blood vessels in the left deltoid ligament, it needs to be clipped and then cut off. The assistant lifted the left lateral lobe of the liver, and the ultrasonic scalpel cut off the lesser omentum to the vicinity of the root of the ligamentum venosum (some patients may not handle the lesser omentum). Sufficient dissociation is crucial for subsequent surgical operations. There is no need to deliberately expose the left hepatic vein or inferior vena cava extrahepatically during the operation.

2. Dissection of liver parenchyma: Start along the left edge of the teres ligament and falciform ligament, use an ultrasonic knife to cut off the liver parenchyma, from the foot side to the head side, from superficial to deep, gradually. The upper and lower liver tissue of segment II/III Glisson sheath was dissected to initially reveal the Glisson branch of segment II/III. When the liver parenchyma is severed, if the larger pipeline is encountered, surgical clips, titanium clips or absorbable clips should be clamped and then cut off.

3. Section II/III Glisson's pedicle: Insert a linear cutting closure device through the main operation hole or right auxiliary hole, and close and cut off the II/III section of Glisson's pedicle.

7. Treatment of liver section and placement of abdominal drainage: small oozing blood in liver section can be stopped by bipolar electrocoagulation combined with argon spray coagulation, and active bleeding or bile leakage needs to be sutured; a drainage tube can be selectively placed.

8. Specimen removal: The excised specimen is packed in a disposable collection bag, and the specimen is taken out through the extended umbilicus or a small incision on the pubic bone.

5. Liver parenchyma dissection: The method of liver parenchyma dissection is the same as laparoscopic left hepatectomy. The cut section is the plane of the ischemic line of the liver surface, the right border of the middle hepatic vein, and the midline of the inferior vena cava. Intraoperative ultrasound can be used to determine the course of the middle hepatic vein to help adjust the cut plane. In case of thicker pipes, titanium clips or absorbable clips can be used to clamp them and then cut them off.

8. Specimen removal: Put the specimen into a disposable collection bag, and make another transverse incision in the lower abdomen to take it out, or it can also be taken out from the line connecting the two puncture holes under the costal margin. The lower abdominal transverse incision has the advantages of less pain, hidden incision and good cosmetic effect.

9. Liver section processing and placement of peritoneal drainage: close the incision for specimen collection and re-establish pneumoperitoneum. Small oozing blood in the liver section can be stopped by bipolar coagulation combined with argon spray coagulation, and active bleeding and bile leakage need to be sutured. Finally, the falciform and teres ligaments can be sutured to prevent excessive rotation of the left liver to the right. An abdominal drainage tube was placed under the right diaphragm.

Statement: The pictures and texts are from the Chinese Journal of Laparoscopic Surgery. The focus is on the popularization of medical knowledge, and no economic benefits are sought. If there is any infringement, please contact us in time. 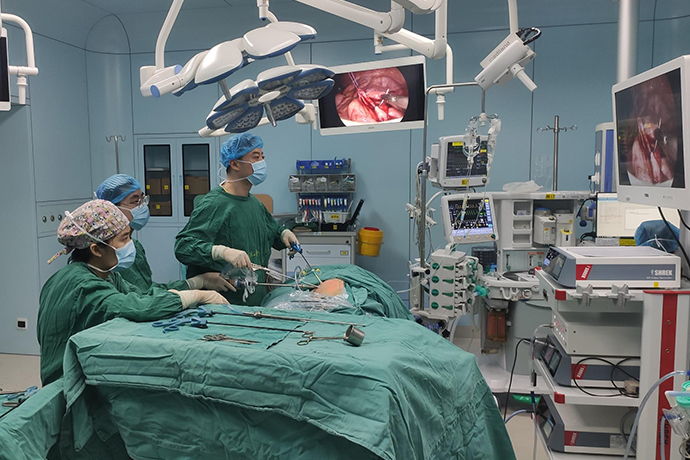