Nasal polyps: The edema of the nasal mucosa protrudes into the nasal cavity and forms a vegetation. It occurs in the ethmoid sinus, maxillary sinus, free edge of the middle turbinate, uncinate process in the middle meatus, ethmoid vesicle, and semilunar fissure. The incidence rate is 1% to 4% of the total population, and it can be single or multiple. Nasal polyps have a strong tendency to recur, and the postoperative recurrence rate can reach 15% to 40%. A tumor formed by extreme edema and hypertrophy of the nasal cavity and sinus mucosa. 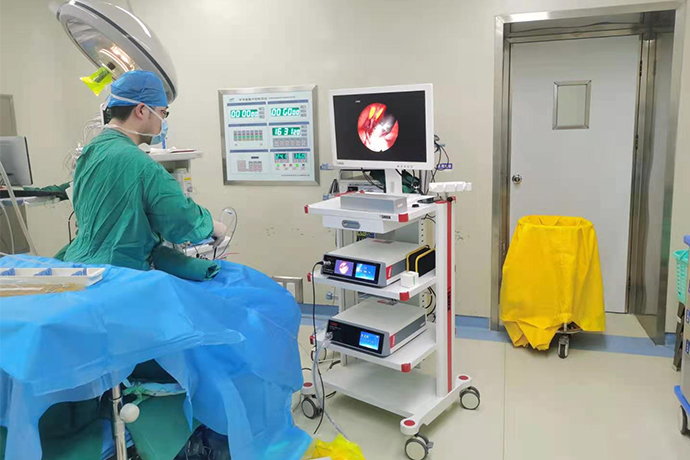 Nasal polyps are more common on both sides and less on one side. A common symptom is persistent nasal congestion, which increases with the size of the polyp. Increased nasal secretions, accompanied by sneezing, secretions may be serous, mucus, such as concurrent sinus infection, the secretions may be purulent. A lot of smell disorders. Those with severe nasal congestion may speak with an obstructive nasal sound and snore during sleep. Elderly people with polyp pedicles can feel something in the nasal cavity moving with the breath. Posterior nostril polyps can cause difficulty in exhaling through the nose when exhaling, and if the polyps block the mouth of the Eustachian tube, it can cause tinnitus and hearing loss. Polyps that block the drainage of the sinuses can cause sinusitis, and patients experience pain and discomfort in the back of the nose, forehead, and cheeks.

In the nasal cavity, one or more new organisms with smooth surface, gray-white or light red translucent can be seen (the smaller ones can be found after the inferior turbinate is retracted), which is like fresh lychee flesh, soft to the touch, not easy to bleed, movable, and non-tender. The polypoid change of the middle turbinate is inseparable from the middle turbinate, slightly hard and slightly red in color.

2. Nasal allergy In nasal polyp tissue, more mast cells, eosinophils and IqE-producing cells can be found, and the level of gE in the fluid increases, suggesting that local allergy has a certain role.

3. Nearly 90% of nasal polyps with eosinophilic inflammation have more eosinophil infiltration, suggesting that nasal polyps are closely related to the increase of these cells.

4. The bacterial superantigen theory Staphylococcus aureus is one of the common symbiotic bacteria in the nasal cavity. Staphylococcus aureus enterotoxin can directly activate a large number of Th2 cells, B cells, eosinophils and mast cells in the nasal mucosa of the middle meatus to synthesize and release a large number of pro-inflammatory cytokines, aggravating the local inflammatory response in the middle meatus. Stimulates the formation of polyps.

A CT scan can show the full extent of the polyp, which may not be fully understood by physical examination alone. Imaging is also required to plan surgical treatment. On CT scans, nasal polyps typically have an attenuation of 10-18 Hunsfield units, which is similar to that of mucus. Nasal polyps may have calcifications.

Other disorders can mimic the appearance of nasal polyps and should be considered if a lump is seen on examination. Examples include encephalocele, glioma, inverted papilloma, and cancer. Early biopsy of unilateral nasal polyps is recommended to rule out more serious conditions such as cancer, papilloma, or fungal sinusitis.

1. Those with smaller initial polyps or lighter turbinate polyps: Oral prednisone 30mg/day for 7 days, and then use nasal spray of Nacoling, 50~100ug each time, 3~4 times a day. Prevent polyps from growing and disappear and control recurrence.

3. After operation: spray into the nasal cavity, twice a day, for 1 to 2 months.

1. Simple nasal polyp removal. For those with clear roots and no previous history of nasal polypectomy. Under local anesthesia, use a nasal polyp snare to cover the pedicle of the polyp, tighten it, and pull it out from the inside of the nose.

2, sinus endoscopic sinus opening, polyp removal. It is mainly suitable for the ethmoid sinus mucosa that has been replaced by polyp tissue and who have a history of multiple nasal polyps removal. During the operation, the ethmoid sinus was fully opened, and the polyps in the sinus were completely removed.

Nasal polyps from the middle turbinate or middle meatus, unilateral or bilateral, or posterior nostril polyps. If the nasal cavity has been mostly or completely blocked, which affects the physiological function of the nose, surgery should be performed first.

Cardiovascular disease or other serious systemic diseases, such as asthma attack, hemorrhagic disease or acute inflammation.