Since the first case of laparoscopic left lateral sectionectomy (LLLS) was reported in 1996, LLLS has been used as a standard anatomic liver resection with lesions confined to the left lateral lobe of the liver (Couinaud segments II and III). Although LLLS is easy to perform, safe, and significantly superior to open surgery, there is no uniform standardized operating model. Combining the anatomical characteristics and clinical practice of the left lateral lobe of the liver, we propose a simple and easy "two-step stratification" LLLS standardized operation mode, which has achieved good curative effect. 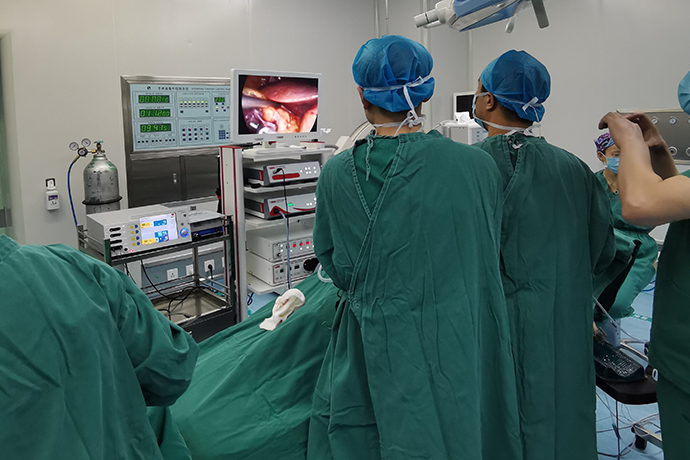 1 Indications for surgery and preoperative evaluation

1.2 Preoperative assessment Comprehensive and sufficient preoperative assessment is an important guarantee for surgical safety. In addition to basic cardiopulmonary function and other important systemic organ function assessment, it is also necessary to improve the Child-Pugh classification of liver function, ICGR-15 test, and the degree of liver cirrhosis. Grading and the presence or absence of portal hypertension, etc., routine preoperative examinations such as upper abdominal color Doppler ultrasonography, enhanced thin-slice CT scan, CTA, CTV and 3D reconstruction, magnetic resonance imaging and MRCP were performed. These examinations can not only confirm the diagnosis, but also help us understand the adjacent relationship of intrahepatic lesions and the variation of intrahepatic duct structure. Studies have shown that in some patients, the left hepatic vein emerges from the left interlobar fissure vein, which is located between the left inner and outer lobes. This vein can be used as the dividing line for the severed liver parenchyma during anatomic left lateral hepatic lobectomy. The current popular 3D virtual imaging technology and model of the liver can not only accurately calculate the residual volume of the residual liver, but also prevent postoperative liver failure. Combined, the surgical process can be rehearsed, which plays an important role in ensuring the safety of the surgery.

2.1 Hole placement and body position After general anesthesia, the patient is divided into legs, and can be tilted to the left or right and raised by 15-30 degrees according to the needs. According to the habit, the operator can stand on the left or right side of the patient, and the mirror-holding hand stands between the patient's legs. between. There are different methods for each center of surgical hole placement. We usually use the "four-hole method", that is, the puncture hole around the umbilicus is used as an observation hole, and a pneumoperitoneum is established. The pressure is 12-15 mmHg (1 mmHg=0.133KPa). A 5 mm and a 12 mm Trocar were placed below each, the latter being the main operation hole, and the 5 mm below the costal margin of the right anterior axillary line was another pair of operation holes.

2.2 Liver dissociation We generally routinely cut off the teres ligament and falciform ligament, and cut off the left deltoid ligament and coronary ligament. If a thick blood vessel in the hepatogastric ligament is found to enter the left lateral hepatic lobe, it will be clamped or cut off, and the canal of Arantius is cut off. The root of the left hepatic vein can be fully exposed. However, for huge malignant tumors in the left lateral lobe of the liver, especially those located in segment II, in order to prevent the tumor from spreading due to squeezing the mass, the "no-touch" principle can be followed. The left lateral hepatic lobe was resected, and finally the perihepatic ligament was cut to remove the specimen.

2.3 Determination of liver cross-section In principle, the extent of anatomical left hepatic lobectomy should be based on the extent of ischemia that occurs after the hepatic pedicles of segments II and III of the liver are blocked, because the left hepatic vein generally runs between segments II and III, not The demarcation line of left lateral hepatic lobe resection, as long as a few patients have left interlobar fissure veins located between the left inner and outer lobes, this can be the sign of liver rupture. Therefore, it is customary to use the left edge of the falciform ligament as the pre-cut line when performing left lateral lobectomy. However, for patients with huge tumors close to the left inner lobe, sometimes it is difficult to determine the cross-section, so intraoperative B-ultrasound is required. Ultrasound is of great value in judging the adjacency, course and variation of intrahepatic vessels, and can guide laparoscopic anatomic segmentectomy. In addition, intraoperative B-ultrasound can be combined with ICG fluorescence imaging technology. By puncturing the portal vein of the target liver segment, the liver incision plane can be determined by positive staining.

2.4 Bleeding control We still choose the classic "Pringle" method to block the blood flow into the liver. Due to the anatomical characteristics of blood flow into the liver from the left lateral hepatic lobe, it is generally impossible to block the hepatic artery and portal vein alone outside the liver. However, if some patients have independent middle hepatic artery and left lateral hepatic lobe artery (Figure 3) The left lateral hepatic lobe artery can be isolated at the porta hepatis to be clipped or severed. For the prevention of hepatic vein bleeding, our center routinely combines anesthesiologists to control low central venous pressure, and CVP is generally controlled at 0-3 mmH2O (1 mmH2O=0.098 kPa). Studies have shown that low CVP control technology can significantly reduce intraoperative bleeding. . Of course, low central venous pressure has the risk of air embolism, so we need to be vigilant.

2.5 Liver parenchyma dissection Liver parenchyma dissection is a key step in hepatectomy. Currently, there are many types of operating instruments for laparoscopic dissection of liver parenchyma, mainly including ultrasonic scalpel, CUSA, multi-function scraper and suction knife, water jet, and Ligasure. Instruments, our center is used to using ultrasonic scalpel combined with bipolar coagulation to stop bleeding, often using the "dual main knife" mode. Our research and practice show that the "dual main knife" mode in laparoscopic anatomical hepatectomy can improve the response to accidental bleeding, etc. The ability to handle emergencies, thus ensuring a safer and more efficient operation. "Two-step stratification method" is the first laparoscopic liver parenchyma dissection method proposed by our center, especially suitable for anatomical left lateral hepatic lobectomy. The tangent uses an ultrasonic knife with energy to crush the liver tissue. The smaller tube can be directly cut off, and the thicker tube can be cut off after being clamped. Following the principle of “slow walking, small jaws, and swallowing one by one”, the To the head, from the ventral side to the back side, the liver parenchyma is gradually thinned from superficial to deep, until the plane connecting the hepatic pedicle and the left hepatic vein of segment II and III. The second step is to sequentially cut and close the left lateral lobe hepatic pedicle and left hepatic vein, insert a 60 mm cutting and closure device (Endo-GIA), select blue nails or white nails according to the thickness of the hepatic pedicle, and then cut off the liver segments III and II in turn. The pedicle usually needs 1~2 nails. A GIA (commonly used white nail) was re-inserted and the left hepatic vein and its branches were severed until the left lateral hepatic lobe specimen was completely removed. When using GIA, it should be noted that the tip must be more than 1.5 cm beyond the tissue to be completely cut and closed. For patients with left lateral hepatic lobe calculi, the bile duct and blood vessels should be treated separately as much as possible. Generally, the anterior wall of the bile duct is incised, the calculi are taken out, and a choledochoscope is placed to check for residual calculi, and then a GIA is placed at the proximal end. To check whether there is a stone clipped, otherwise it will lead to incomplete closure and failure.

2.6 Treatment of liver section After left lateral hepatic lobectomy, the liver section is generally more regular. The bleeding of the small section can be directly stopped by bipolar electrocoagulation, and the large vascular bleeding can be stopped by 5-0 Prolene suture. Carefully check the section for bile leakage. If a T tube is placed in the common bile duct, water can be injected from the T tube to test for leakage. Small bile leakage can be sutured with non-invasive sutures, and larger bile duct ruptures can be repaired. The specimens were taken out through the subumbilical longitudinal incision or the suprapubic transverse incision, and the pneumoperitoneum was vented. When the pneumoperitoneum was re-established, the liver section was checked for active bleeding. The liver section can be covered with hemostatic gauze, powder, glue and other materials as appropriate, and a porous abdominal drainage tube should be properly placed under the liver section.