Laparoscopic right hemihepatectomy is a highly technically difficult surgical operation. The main reason is that the procedure is complicated, there are many liver anatomical variations, intraoperative bleeding is common, and bleeding that is difficult to control is prone to occur, and the incidence of intraoperative and postoperative complications is high. 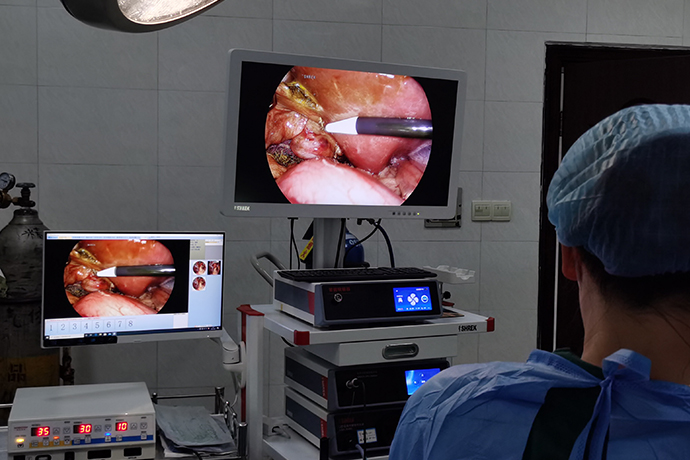 The surgical approach of laparoscopic right hepatectomy is divided into two types: conventional approach and anterior approach. At present, most liver surgery centers in China adopt a conventional approach, that is, fully free the surrounding ligaments of the liver, handle the short hepatic blood vessels and even the right hepatic vein, and dissociate the liver parenchyma under sufficient exposure conditions to prevent the liver parenchyma from being dissected to a deeper position. The bleeding was difficult to fully reveal and control, resulting in forced transition to open abdomen.

The team of Professor Chen Yajin from Sun Yat-sen Memorial Hospital of Sun Yat-sen University routinely cut the liver through an in-situ anterior approach, cut off the liver parenchyma from bottom to top, from shallow to deep, finely dissected the intrahepatic ducts along the "intrahepatic space", ligated one by one, and finally processed the perihepatic ligament . They believe that this surgical method is more in line with the principle of tumor-free laparoscopic right hepatectomy for liver cancer. This standardized operation has played an active role in the promotion and application of laparoscopic right hepatectomy.

In terms of disease spectrum, the indications of laparoscopic right hepatectomy are basically the same as open surgery, including benign and malignant tumors involving the right hepatic liver, inflammatory lesions, right intrahepatic bile duct stones, and cystic bile duct confined to the right liver Expansion, etc., and even the right half of the donor liver for living donor liver transplantation. However, the current laparoscopic surgery method cannot completely replace the open surgery method.

Liver malignancies include primary liver cancer, secondary liver cancer and other rare liver malignancies. Contraindications include in addition to contraindications for open right hepatectomy, but also those who cannot tolerate pneumoperitoneum; those with intra-abdominal adhesions that are difficult to separate and expose the lesion; those whose lesions are close to or directly invade large blood vessels; The second or third hepatic hilum affects those exposed and separated; the hilar is invaded or the lesion itself requires extensive hilar lymph node dissection.

⑴ The lesions near the hepatic hilum;

The author believes that, theoretically, the indications of laparoscopic right hepatectomy have been highly close to open surgery, but we should realize that the development of laparoscopic hepatectomy is unbalanced. Due to the uneven surgical techniques of surgeons, indications and contraindications are not applicable to every surgeon in liver surgery. Individuals should choose the surgeon's personal surgical indications under the premise of fully ensuring the safety of the patient.

Using the dual main knife operation mode, the surgeon on the right side of the patient holds the separating forceps or Beike forceps in the left hand to hold the separated liver to help expose, and the right hand holds the ultrasonic knife or CUSA to cut the liver parenchyma. The surgeon on the left side of the patient holds an ultrasonic knife, bipolar electrocoagulation, or aspirator to operate.

(2) Disconnected ligament: After laparoscopic exploration judges that there is no distant metastasis feasible for surgical treatment, the perihepatic ligament is disconnected. The order is generally hepatic round ligament, falciform ligament, right triangular ligament, right coronary ligament, liver and kidney ligament .

(3) Routine resection of the gallbladder and anatomy of the first hepatic hilum: The author advocates intrathecal anatomy. Dissect the Glisson sheath of the hepatoduodenal ligament from the right side of the common bile duct, gradually open the peritoneum, and identify the portal vein along the posterior space of the common bile duct.

During the separation process, after opening the lateral and dorsal serous membranes of the portal vein, be aware that there may be branches leading to the caudate and square lobes, and be careful to avoid tearing and bleeding during the separation process. After fully exposing these branches, the branch from the right portal vein to the caudal lobe is generally not processed for the time being (it may be necessary to process the donor liver in living donor liver transplantation). If you want to deal with it, you can use 5-0 sutures to ligate the proximal end of the blood vessel, and the distal computer feedback to control the bipolar electric knife (ligasure) or ultrasonic knife cutting.

CUSA can not only shatter the liver cells to leave the duct structure, but also play a part of the function of the suction device. When encountering the duct structure, the operator on the left side can replace the clamp with the hemo-lock clamp. Note that sometimes large pipes need to be completely exposed from the back with right-angle pliers or golden fingers. As the liver is severed, you will generally encounter the V and VIII branches of the middle hepatic vein. Pay attention to protect it to avoid tearing or accidental interruption of the ultrasound knife and cause hemorrhage.

The hepatic parenchyma needs to reach the hilar plate structure around the bile duct of the first hepatic hilar. At this time, the liver parenchyma is split from the center of the caudate lobe in front of the inferior vena cava. This process should be close to the dorsal side of the right liver pedicle, from the foot side to the head side.

(9) The excised specimens need to be put into a specimen bag of appropriate size and taken out: the specimens are usually taken out according to the size of the specimens by connecting the poke holes on the midline in longitudinal rows and cutting them. It can be extended appropriately according to the different distance between the two poke holes, generally between the two poke holes, or you can consider making another transverse incision on the pubic symphysis to take out the specimen.

(10) Treatment of liver section, fixation of residual liver, and placement of drainage tube: Continuously suture the incision to take the specimen with the abdomen thread, keep the original poke hole with interrupted suture and place the thread without ligation, and place the poke card and surgical instruments again. Check the liver section for hemorrhage and gallbladder leakage, if necessary, suture with 4-0 prolene suture. Flush the abdominal cavity repeatedly, and after confirming that it is correct, hemostatic materials can be placed on the liver section. The falciform ligament stump was sutured again to fix the residual liver, and finally the liver section and Venturi foramen were placed for drainage, and the operation was completed.

4. Summary and analysis of surgical details

The team used the double main knife + CUSA method to optimize the method of liver parenchymal dissection, and gave full play to the advantages of two surgeons at the same time, avoiding the time waste caused by different surgical instruments repeatedly entering and leaving the abdominal cavity during the single main knife operation, and integrating various energies The advantages of the instrument improve the efficiency of liver severance and shorten the operation time. Moreover, this optimized method, through the rational use of CUSA, can achieve the engraving of the intrahepatic duct, effectively avoiding bleeding that is difficult to control during the hepatectomy.

The second hepatic portal treatment is another key. The team recommends that the right hepatic vein should not be dissected out of the liver routinely. Instead, it is advisable to dissect the right hepatic vein in the liver and close it when approaching the second hepatic hilum in the later stage of the hepatic parenchyma. Because hepatic veins are easy to tear and cause uncontrollable bleeding, and after tearing, it is likely to cause air embolism, which can cause death in severe cases.

Of course, if the local tissue is loose and the level is clear, extrahepatic anatomy and suspension of the right hepatic vein can also be considered. This has certain advantages for the protection of blood vessels and the judgment of the plane of the liver when anatomically resected tumors in some special parts.

It is best to use a sling (line) when severing the right hepatic pedicle and right hepatic vein during the operation. After suspending the pipeline structure, insert the cutting closer, and be sure to see the end of the staple cartridge and the reserved side to avoid bleeding And pre-save the damage of the side pipeline. For patients with hepatolithiasis, before cutting the closure device to treat the right hepatic pedicle, it is necessary to determine the fracture plane through laparoscopic ultrasound to exclude intrahepatic bile duct stones, so as to avoid accidental nail bursts.

For the treatment of short hepatic blood vessels, it can be temporarily closed with a small titanium clip or hemo-lock clip. It is recommended to ligate the blood vessel with sutures after removing the specimen to increase reliability. Regarding the liberation of the ligaments around the liver, generally the right hepatectomy does not necessarily completely free the left hepatic ligament, but it is recommended that at least the left coronary ligament be freed to facilitate the rotation of the liver and facilitate exposure.

The choice of surgical approach should not be limited to a certain method. For patients with large tumors, difficult to move, and a history of interventional embolization or radiofrequency ablation, the relationship between the liver and the diaphragm or abdominal wall is often relatively dense, and it is quite difficult to free the liver. The author believes that in this case, the use of anterior approach to cut the liver or a combination of the two methods may be more conducive to the complete resection of the tumor, and avoid unnecessary tumor rupture, which may increase the risk of implantation and metastasis. 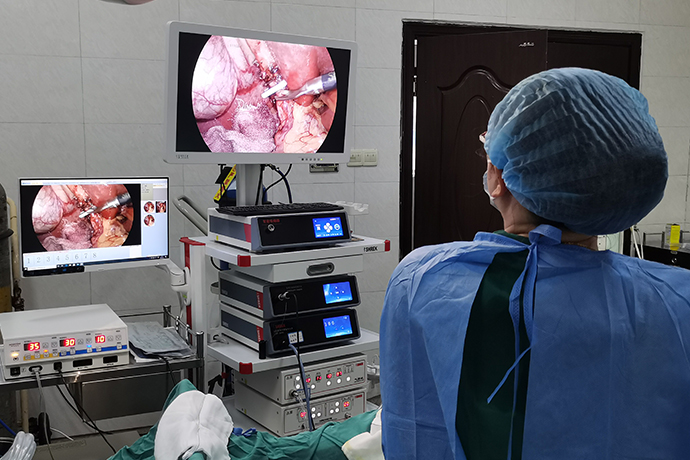