Laparoscopic myomectomy is a surgical method that removes uterine fibroids and preserves the uterus to ensure that the patient has menstruation and fertility. Laparoscopic surgery lacks the sense of hand touch, so it is easy to miss small intramural fibroids that do not cause uterine morphological changes. This is the defect of laparoscopic myomectomy. 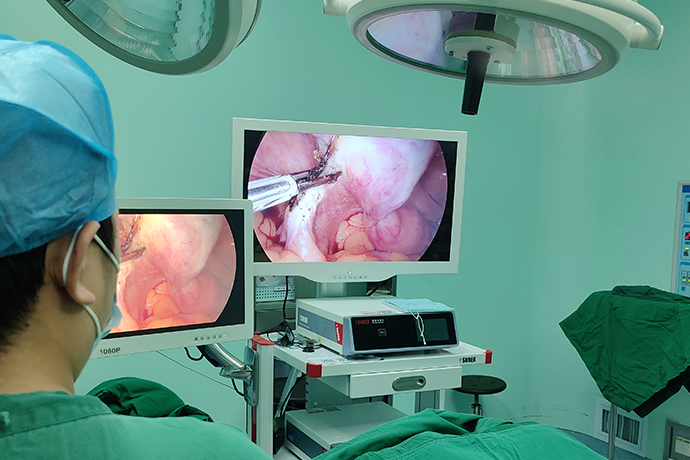 Indications
1. Menorrhagia causes secondary anemia, and medication is ineffective.
2. Severe abdominal pain, dyspareunia or chronic abdominal pain, acute abdominal pain caused by torsion of pedicle fibroids.
3. Large size or cause compression symptoms such as bladder and rectum.
4. It can be determined that fibroids are the only cause of infertility or recurrent miscarriage.
5. Intermural fibroids <3 or the diameter of each fibroids <12cm.

Preoperative preparation
1. Before surgery, the patient should undergo detailed gynecological examination and ultrasound examination to understand the location, size, number and depth of fibroids.
2. Hysteroscopy is required for patients with uterine cavity space and intimal thickening indicated by ultrasound.
3. Submucosal uterine fibroids are more suitable for hysteroscopic resection of fibroids.

Surgical steps and techniques
1. Pretreatment (Intramuscular injection of pituitrin or oxytocin) Inject 20U of oxytocin or 12U of pituitrin in the muscle layer of the uterine incision (dilute in 50ml of 0.9% sodium chloride solution) until the tumor develops White.
2. Cut the plasma muscle layer and pseudocapsule on the surface of the fibroids. Cut the plasma muscle layer and pseudocapsule on the surface of the fibroids with a monopolar electrocoagulation hook to reach the tumor body, and the white and hard fibroids are automatically exposed.
3. Removal of fibroids. Clamp the tumor with large grasping forceps and pull it outwards. Then use scissors or electric coagulation hooks to separate the pseudocapsule and electrocoagulate the blood vessels of the fibroids to completely remove the fibroids. The fibroids are removed and placed in the rectal uterine fossa.
4. Suture the uterine incision. The tumor cavity is shallow. Use absorbable sutures to make intermittent "8" sutures on the plasma muscle layer tissues on both sides of the incision, or continuous inversion sutures. The tumor cavity is deep, and it is sutured continuously or intermittently in two or three layers.
5. Take out the fibroids and expand the left or right lower abdominal trocar incision. According to the size of the tumor, choose a 15mm, 18mm or 20mm tumor crusher to cut it out into strips.
6. Flush the pelvic cavity, check to make sure that there is no bleeding point, remove the instruments, and vent the abdomen.

Intraoperative risks and prevention
1. Surgical preconditioning effectively reduces the bleeding during the removal of the subuterine segment and the uterine fibroids, the operation field is clear, the anatomy level is clear, and the operation time is shortened.
2. Master the principles of minimally invasive surgery. Except for fibroids, do not touch other organs, especially when performing electrical resection, the instrument must not touch other organs and blood vessels. Complications such as hemorrhage and organ damage may occur.
3. Each fibroids must be removed individually. Because of the difficulty of laparoscopic maintenance, it is not possible to remove as many fibroids as possible through a uterine incision, so as to avoid leaving a dead space.
4. It must be separated along the pseudo-capsule separation interface of the fibroids, easy to peel, reduce bleeding, and not easy to damage the surrounding normal muscle layer.
5. After removing the fibroids with as little electrocoagulation as possible, in order to reduce bleeding, they should be sutured as soon as possible, and electrocoagulation should be used as little as possible to reduce electric heating damage and fistula formation.
6. Uterine wound suture The pedicled subserous fibroids can be ligated. Pay attention to the pedicle not to be too short, so as to avoid the coil slippage and cause postoperative bleeding. If the fibroids are deep, they can be sutured in layers, and the dead space should be closed during suture to prevent postoperative bleeding and hematoma formation. If the fibroids are cut through the uterine cavity, they must be sutured in layers. First, suture the basal layer of the endometrium, and then suture the serosamuscular layer. Full-thickness suture is not allowed to avoid iatrogenic endometriosis.
7. Prevention of postoperative tissue adhesions Postoperative adhesions are mainly caused by low and fixed wounds after the removal of posterior uterine fibroids, which are easy to adhere to the mesenteric and intestinal tubes. Coating medical sodium hyaluronate anti-adhesion gel or absorbable hemostatic gauze on the wound surface to form a protective film to reduce adhesion.

Precautions after operation
1. Continue to use uterine contraction drugs after surgery to strengthen uterine contractions and prevent postoperative bleeding.
2. Remove the urinary catheter 24 hours after operation, encourage early getting out of bed after operation and urinating spontaneously.
3. General prophylactic antibiotics 24 hours after surgery, those with signs of infection should choose strong, broad-spectrum antibiotics and prolong the application time as appropriate.
4. The recurrence of fibroids may be the re-growth of fibroids, or the growth of missing small fibroids. The B-ultrasound should be rechecked 3 to 6 months after the operation. It is not necessary to recheck it too early to avoid the surgical wound from being mistaken for myoma.
5. The time of re-pregnancy after surgery depends on the size and concentration of the fibroids, and whether the fibroids penetrate the uterine cavity. If the fibroids are small and are located under the serous membrane, there is no need to use contraception too long after the operation. Generally, pregnancy can be done after 3 months; if the fibroids are too large or the uterine cavity is punctured when the fibroids are removed, it will take 1 year after the operation The pregnancy is ideal.