Introduction
Laparoscope subtotal hysterectomy(LSH) is a surgical method in which the uterus is removed under a laparoscope while the cervix is preserved. This procedure removes the uterine body and uterine endometrium that have undergone lesions, while retaining the normal cervix and pelvic floor supporting tissues. It is suitable for relatively young women who need to remove the uterus due to uterine disease. The patient's surgical method. 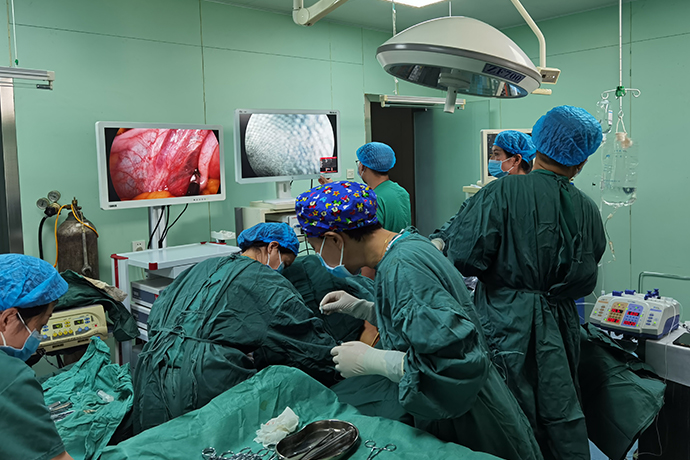 Contraindications
1. Age<=40, need to retain reproductive functions.
2. Age> 40, or have given birth but the patient insists on keeping the uterus.
3. Uterus larger than 12 weeks in size.
4. Cervical fibroids.
5. Combined vaginal wall bulging and uterine prolapse.
6. Malignant lesions of the cervix or endometrium were not excluded.

Preoperative preparation
1. Before the operation, the patient should undergo a detailed gynecological examination and ultrasound examination.
2. Patients with irregular vaginal bleeding and intimal thickening should undergo hysteroscopy and curettage to rule out malignant endometrial changes.
3. Preoperative cervical cytology and colposcopy to exclude cervical lesions.

Surgical steps and techniques
1. The patient takes the lithotomy position and lifts the uterus up the uterus.
2. Lift and swing the uterus to the right, fully flatten the right parauterine tissue, clamp and sever the uterine round ligament, tubal isthmus and ovarian proper ligament on the left side of the vascular closure system, and treat the right side in the same way .
3. Cut open the bladder and peritoneum and turn back
Lift the uterus and press the uterus back and down to fully expose the bladder and uterine depression and the folded peritoneum. The surgeon's left hand clamps the bladder and peritoneum, and uses the electrocoagulation hook to separate the folded peritoneum, and push the bladder to the level of the internal cervix Approximately 0.5cm below.
4. The next section of the ligation sub-guan
Separate the parauterine tissues until the uterine veins, without breaking the uterine blood vessels, place the lower part of the human uterus through a 10mm cannula to ligate the coil, tighten the coil slightly, exit the uterine manipulator, and tighten the coil again until the surface of the uterine body becomes Purple, tie two more convenient knots.
5. Take out the sub-official body
The surgeon uses a 15-18mm tumor crusher to cut the uterus into strips and take it out. When cutting, pay attention that the serrated knife of the tumor crusher should be placed in the center of the pelvic cavity in the left hand to avoid damage to the bladder, rectum and other organs.
6. Reinforcement to stop bleeding
Electrocoagulation of the cervical stump and cervical cavity to stop bleeding, or bandage the cervical stump again 1 to 2 times.
7. Suture the pelvic peritoneum
The peritoneum was sutured continuously under the microscope, and the wound was embedded.
8. Flush the pelvic cavity, check that there is no bleeding, remove the instruments, and vent the abdomen.

Intraoperative risks and prevention
1. When using LigaSure to cut tissue, the cutter head must grasp the tissue tightly to keep the tissue under proper tension, which can improve the cutting efficiency and shorten the operation time, and there is no need to cut too much tissue at a time, so as to prevent the tissue closed by the clamp from falling off and bleeding .
2. When cutting the peritoneum of the bladder and turning back, it is necessary to correctly separate the space between the turning back femur membrane and the official neck and the isthmus of the ziguan. Do not move the incision too upward or too close to the ziguan tissue for fear of damaging the bladder, otherwise it will not only be difficult to operate , And there is more bleeding, which increases the chance of injury.
3. When ligating the cervix, it must be confirmed that no other tissues are embedded in the coil before the coil can be tightened. After tightening, the knot should be located at 9 o'clock on the left side of the cervix. Prevent the putter from being angled to the lead and breaking the line. If there is no ischemic change in the uterus after band ligation, do not rush to revolve the uterus. Repeat the ligation until the uterus has obvious ischemic changes before revolving the uterine body to avoid bleeding.
4. The lower part of the uterus in adenomyosis is often very hard, and the effect of ligation is difficult to guarantee. If the stump left by the rotary incision is less, the coil is easy to fall off. If there is a fibroids in the lower segment of the uterus, the fibroids will leave a concave cavity after the rotatory resection, and it is easy to cause the coil to fall off. You should put another circle under the original coil in time before the fibroids are completely rotatory cut.
5. The tumor crusher must be performed under direct vision, away from the surrounding tissues and organs, especially when the tumor crusher reaches the isthmus of the uterus, it is necessary to be more cautious to prevent excessive cutting leading to slippage and bleeding of the ligation thread and bladder injury.
6. When coagulating the cervical stump, special attention should be paid to the coagulation of the parauterine vessel stumps on both sides and the endometrial tissue of the cervical canal to prevent postoperative bleeding or periodic bleeding due to residual endometrial hematoma.