What Exactly Does 4K UHD Mean?

Does it have more pixels than Ultra HD?
If 4K is four times that of 1080p, does that mean 4K is equal to 4320p?
The above three questions are answered in order: it depends on the situation; sometimes this is the case; it is not.

'MP'
MP is the total number of pixels, that is, the result of multiplying the number of rows (P) and the number of columns (K) of pixels (megapixels). For example, for a 1080P camera, 1920 pixels are multiplied by 1080 pixels to get the total number of pixels of 2MP (megapixels).
1080P (or Full HD)
In the past, vertical resolution was used to describe resolution. Therefore, 1080p represents the vertical resolution. The aspect ratio of almost all high-definition displays is 1.78:1 (that is, 16&times;9, also known as "widescreen"), which means that its horizontal resolution is 1920 pixels (that is, 1920&times;1080).

This is another reason why people are currently confused about the concept of resolution. After all, we talked about vertical resolution when discussing TV resolution in the past few decades. Now it has suddenly become "4K" which means horizontal resolution. , Everyone is confused.
Therefore, 1080p does not equal "1K". Just as Ultra HD is equivalent to 4K, 1080p is equivalent to 2K. In other words, the resolution of 1920&times;1080 is very close to the 2K standard described by DCI. Even so, most people often don't call 1080p 2K, they call it 1080p or Full HD.
The number of pixels of 720p is about half of that of 1080p.

4K
Let&rsquo;s start with the current market&rsquo;s top resolution 4K, so that we can talk about the basic principles to be described when answering most resolution doubts.
Technically speaking, "4K" means a horizontal resolution of 4096 pixels. This is the resolution proposed by the Digital Cinema Initiatives. Because the aspect ratio of the movie is different, the exact shape of the rectangular screen determines the aspect ratio of the movie, so its vertical resolution is not specified.
Therefore, strictly technically speaking, "4K" is not ultra-high-definition, and the resolution of ultra-high-definition is 3840&times;2160. The pixel difference between the two is only 13%, which is basically not much difference. Most people prefer the name "4K" for Ultra HD.
Ultra High Definition stands for "Ultra High Definition" and is the next generation technology of HD (High Definition), Full HD (Full HD), and Quad HD (Eight Times HD). The "Ultra HD UHD" standard recommendation issued by the International Telecommunication Union (ITU) calls the display with a physical resolution of 3840&times;2160 (4K&times;2K) and above as ultra high definition, which is an ordinary FullHD (1920X1080) wide and high Twice each and four times the area.

2K
From largest to smallest: 4k technology, screen aspect ratio 1.78:1; UHD ; 2k technology, screen aspect ratio 1.78:1; Full HD 1080p; 720p.
Of course, we almost never saw the word "2K" before "4K" became common. It often refers to "standard format". Most digital cinema projectors used in theaters have a resolution of 2K (some projectors have a lower resolution). Similarly, according to DCI, it only specifies a horizontal resolution of 2048, and a vertical resolution is not specified.

Display resolution
Display resolution: WUXGA, WXGA, WXXXGA, WXCBGBSA and WXLADYGAGA
In the computer world, people use these puzzling, shockingly non-user-friendly messy letters to describe resolution. Oh, that's wrong, it doesn't shock the "people", after all, they are all computers.
Basically, the ones we are most likely to see are FHD (1920&times;1080) and WUXGA (1920&times;1200). For the rest, you can prepare a cheat sheet and copy it down to remember. Fortunately, we only encounter these letter combinations when we are looking for a cheaper projector or computer monitor.
The resolution of 4K is 4 times that of HD. If we use a normal HD monitor to watch, it will be compressed to 25% of the original picture size even if the full screen is covered. This will not achieve the material inspection and viewing effect. best effect. Moreover, when watching 4K material on a high-definition monitor, due to the screen being reduced, some focus errors may not be visible due to the reduction, and the noise may also be smoothed out. Therefore, when watching 4K footage produced by film and television, it is necessary to use a 4K monitor together. Very necessary. Similarly, when viewing high-definition material, it is also preferable to use a monitor with a high-definition resolution.
The display content is clear and unclear, and the most important parameters are resolution and pixel density.
The resolution is the number of pixels on the display. When the resolution reaches or exceeds 3840&times;2160, it can be called a 4K display. Compared with the mainstream 1920&times;1080 resolution display, it can display 4 times the pixels.
We generally use ppi (pixels per inch) to express the pixel density. The higher the ppi, the clearer the screen. The mainstream smart phone display screen can reach 300ppi or more, while the mainstream notebook 1080P display screen is only 100+ppi. 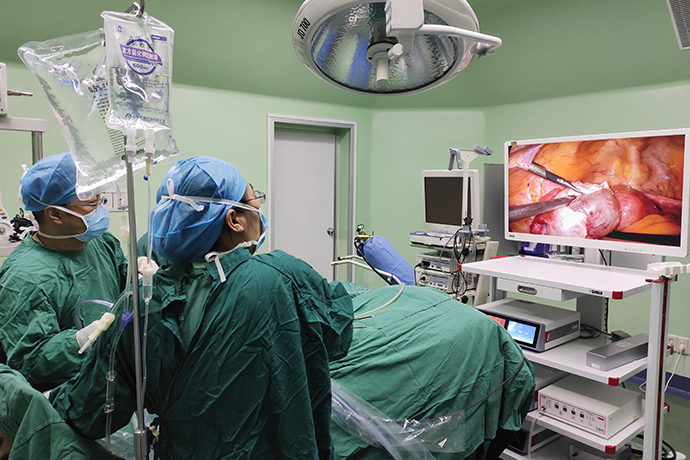