Laparoscopic fenestration and drainage of liver cysts is used for the surgical treatment of liver cysts. Liver cyst is a common benign disease of the liver. When a liver cyst is larger than 10 cm or has symptoms of compression, surgery is required.

2. A small part of liver cysts are caused by trauma and inflammation.

1. Those with smaller cysts are generally asymptomatic.

3. Patients with co-infection may have fever and pain.

4. Acute abdominal pain may occur if the cyst is bleeding or torsion.

1. Superficial and symptomatic liver cyst located in the lower part of the liver lobe, at least 5 cm in diameter.

2. A cyst located on the surface of the liver near the top of the diaphragm, which is easy to operate within the laparoscopic field of view.

3. Symptomatic multiple liver cysts, the main purpose of which is to relieve symptoms.

4. Liver cysts combined with larger renal cysts can be fenestrated at the same time.

1. Establish a correct diagnosis, perform B-ultrasound, CT or MRI before surgery to understand the location, number, and size of liver cysts, pay attention to whether the cyst capsule is smooth, and prevent misdiagnosis of some malignant or potentially malignant cystic lesions.

Generally, the three-hole technique is used to complete the operation. After routinely disinfecting the surgical field, first make an arc-shaped incision along the lower edge of the umbilicus, insert a pneumoperitoneum needle, and establish a pneumoperitoneum. Insert a 10mm puncture cannula and insert a laparoscope through this cannula to explore the liver and cysts and observe the location, size, and number of the cysts. A 10mm puncture cannula is inserted under the xiphoid process as the main operation hole; if the lesion is in the right hepatic hemi, a 5mm puncture cannula is inserted in the anterior axillary line of the right costal margin as an auxiliary; if the cyst is located in the left hepatic, the puncture point can be Change it under the left costal margin; if the operator of LC is proficient, he can also choose the puncture point that is conducive to the operation more flexibly according to the location of the lesion. The general principle is that it is conducive to approaching the lesion and conducive to the operation. If the cyst is too large and other cannulas are difficult to insert, the PTBD drainage tube can be used to pierce the cyst to release the fluid in the sac before inserting other cannulas.

The opening of the cyst wall should not be too small. Too much residual cyst wall still has the function of continuous secretion. Too small opening can lead to poor drainage. In addition, the cyst near the top of the diaphragm can easily be covered and adhered by the diaphragm, thereby causing secretion. Fluid retention in the cyst and the formation of new cysts is not uncommon clinically. Except that the window is large enough, it is best to wipe the cyst wall with 2% iodine tincture or 75% ethanol solution to perfuse and flush, destroy the epithelial cells of the cyst wall, reduce the secretion of cyst fluid and the recurrence rate, and a small amount of cyst fluid can flow into the abdominal cavity. Absorbed by the peritoneum. Sometimes clear liquid begins to flow out after the window is opened, and then bloody liquid flows out. This is mostly due to edema and congestion of the cyst wall, blood vessel dilation, and bloody exudation from the cyst wall after decompression. Whether there is active bleeding in the cyst cavity, if there is active bleeding, laparoscopic suture should be used to stop the bleeding; if it is only bleeding, norepinephrine saline can be injected into the cavity to constrict the blood vessels of the cyst wall. For such patients, it is best to place a drainage tube in the residual cavity to observe whether there is continued bleeding after the operation. The hemostasis of the edge of the cyst wall after the cyst is opened should be reliable. Any visible active bleeding should be electrocoagulated one by one.

1. After anesthesia, sterilize the drape, make a puncture hole under the umbilicus, establish an artificial pneumoperitoneum, and insert the laparoscopic instruments according to the 3-hole method;

2. Exploring multiple cysts on the surface of the liver, and a huge cyst on the right liver, about 20 cm in diameter, fibrosis on the surface of the cyst wall, and abundant blood supply. The electrocoagulation hook was opened on the thin part of the capsule wall, and a colorless and slightly turbid liquid was sprayed out. A total of about 2000 ml of capsule fluid was drawn with a suction device.

4. Remove the cyst without liver parenchyma, put the cyst wall into a specimen bag, and take it out through the umbilical hole;

5. Take a section of the vascularized omentum with an ultrasonic knife, stuff it into the cavity of the liver cyst, and fix it on the edge of the cyst wall with Hemolok;

6. Check that there is no active bleeding at the edge of the cyst, the right infra-hepatic drainage tube is placed in front of the right axilla, and the hepatic cyst is placed in the cavity of the xiphoid for drainage. 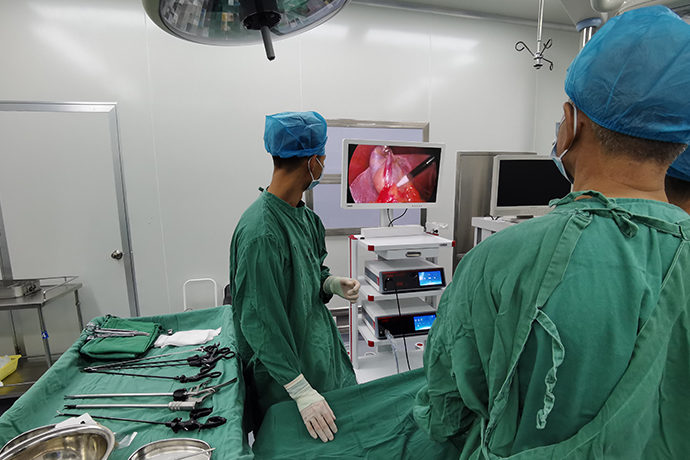