Brief introduction
Laparoscopic ovarian cyst stripping refers to the operation of completely peeling off the ovarian cyst under laparoscopy to preserve the remaining normal ovarian tissue.

Indications
1. Patients with benign ovarian tumors who are younger than 40 years old or need to preserve fertility.
2. Patients with benign teratomas and simple cysts with missing ovaries on one side of the ovary older than 40 years old but not menopausal.
3. Reversible tissue ischemia benign ovarian tumor pedicle torsion needs to preserve the ovaries.

Contraindications
1. Severe medical illnesses who cannot tolerate anesthesia or laparoscopic surgery.
2. Severe adhesions in the pelvic and abdomen can not successfully place the laparoscope.
3. Clinically suspected patients with malignant tumors.

Surgical steps and techniques
1. Exploring the pelvic and abdominal cavity Collect abdominal fluid or flushing fluid if necessary and send it to cytology. Pay special attention to the under the diaphragm or the surface of the liver. If there is a metastatic tumor under the diaphragm, it should be transferred to transabdominal surgery for a clear diagnosis.
2. Separation of adhesions If there are adhesions at the beginning of the operation, the adhesions should be separated first.
3. Exposure of ovarian cysts During the operation, use non-invasive forceps to lift the proper ligament of the ovary and turn sideways to expose the ovarian cyst to the front or upper side of the uterus; or use a stick or holding forceps to pull the ovarian cyst out of the uterine rectal depression Place it on the side of the uterus.
4. Electrocoagulation or incision of the surface capsule of the ovarian cyst. Unipolar electrocoagulation can be used to gently coagulate the surface capsule of the ovary, or make a small cut in the thinner part of the ovarian capsule.
5. Peel off the ovarian cyst. Use curved forceps to separate the cyst from the ovarian capsule at the electrocoagulation site or the small incision on the surface of the ovary, separate the gap, tear or cut the envelope along the gap, and gradually separate until it is completely peeled off
6. Suture the ovaries with 3-0 or 2-0 absorbable thread layered purse-string suture or continuous buckle-lock suture, be careful not to leave a dead space.
7. Take out the cyst Put the specimen bag into the pelvic cavity through a 10mm sheath tube, put the cyst in the bag, lift the bag through the 10mm sheath sheath, cut a small opening in the cyst wall in the bag mouth, and take out the cyst after draining the cyst fluid wall.

Surgical risks and prevention
1. Organ injury is rare under normal circumstances, but if the ovarian cyst is densely adhered to the posterior lobe of the broad ligament, the intestine, and the posterior wall of the uterus, the intestine and ureter may be damaged when the pelvic adhesion is separated.
Precautions:
①The surgeon must be familiar with the anatomical structure of the pelvic and abdominal cavity;
②When separating adhesions, pay attention to the ureteral movement, avoid operating close to the ureter and damaging its blood supply. When close to the intestine or ureter, try to blunt or separate with scissors, and avoid using a single pole to avoid burns;
③Once injured, repair or ureteral stent treatment should be performed;
④The specimen should be taken under laparoscopic monitoring, and the intestine should not be accidentally injured.

3. Cyst rupture and content contamination. Cyst adhesion to surrounding tissues or dense adhesion of the cyst wall, ovarian tissue and too thin cyst wall. The cyst rupture during the operation causes the contents to contaminate the pelvic cavity and even the abdominal cavity.
Precautions:
①When peeling off the cyst, distinguish the boundaries and avoid rough tearing;
②The adhesion between the cyst wall and the ovary is dense. When the separation may cause the cyst to rupture, it can be cut along the loose part;
③Using the "bagging method" for cysts that have been completely removed, and take them out under the supervision of a laparoscope;
④ The ovarian cyst is huge, first puncture and aspirate the cyst fluid, suture or ligate the puncture port, and then remove it;
⑤ If it breaks, rinse with plenty of saline. 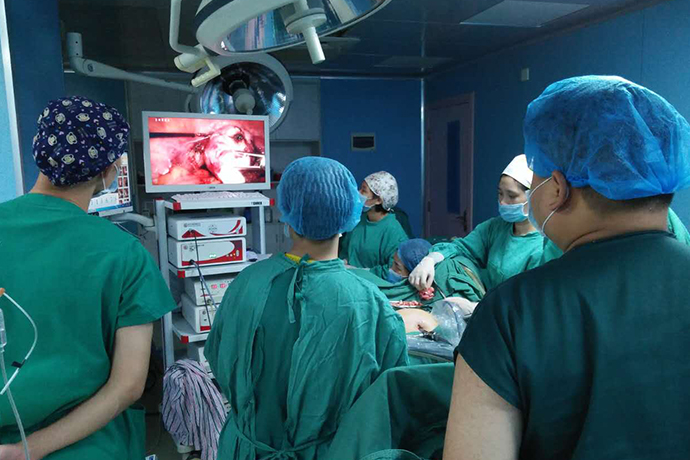