Laparoscopic total laproseopie hysterectomy (TLH), TLH is a kind of laparoscopic cutting of ligaments, blood vessels and vaginal wall tissues around the uterus to completely free the uterus and then remove it from the vagina and suture it under laparoscopic surgery Surgical method of vaginal stump. 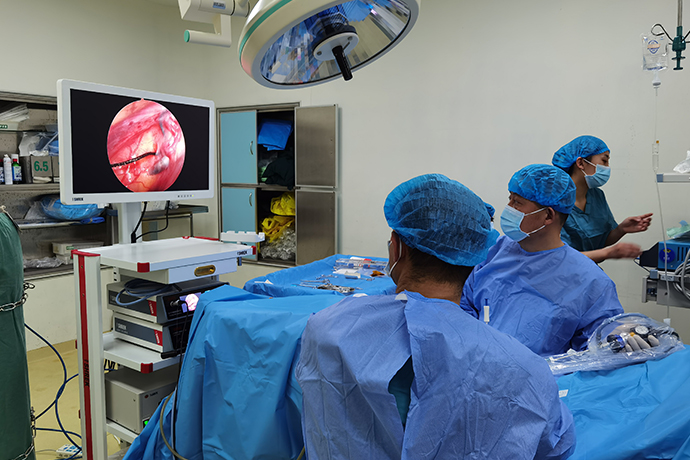 Indications
1. Benign lesions of the uterus: such as uterine fibroids, adenomyosis, dysfunctional uterine bleeding, etc. who need to remove the uterus;
2. Early uterine malignant tumors, such as cervical carcinoma in situ, cervical epithelial or endometrial dysplasia and other patients who are suitable for total hysterectomy.
3. The uterus should not exceed the size of 16 weeks of pregnancy.
Severe pelvic adhesions should be considered as a contraindication for laparoscopic surgery.

3. Open the bladder and peritoneum reflex, push the bladder down
Cut the broad ligament from the broken end of the round ligament toward the cervix to about 5mm below the bladder-uterine peritoneum junction. Use grasping forceps to clamp the bladder and fold the peritoneum and anterior wall. At the same time, use the uterine lift to push the uterus, cervix and vagina toward the head. At the upper part of the junction, push the bladder down along the edge of the uterine cup, and push it down to about 2cm below the outer cervix. In case of bleeding, bipolar electrocoagulation can be used to stop the bleeding. Slow cutting when using an ultrasonic knife can achieve a good hemostatic effect.
Step 4. Cut off the bladder, uterus and peritoneum
Step 5. Dissecting the bladder-uterine space
Step 6. Uterine artery cut
Step 7. Circular vaginectomy
Step 8. Closing the vaginal cuffs

5. Turn off the blockage and cervical stump
The use of No. 0 and No. 2-0 needles can absorb tension suture. The suture method can be intermittent suture, intermittent "8" suture, continuous buckle suture and so on. The continuous penetration suture has a good effect on the bleeding of the vagina.

6. Check the pelvic and abdominal cavity
After closing the fornix, use a laparoscope to examine the pelvic cavity, flush and suck the blood clots and debris, flushing helps to find some small bleeding, apply bipolar coagulation to further stop the bleeding, and suture if necessary to stop the bleeding. Check the activity of ureter, normal peristalsis and no dilatation can exclude ureteral injury, only peristalsis is not confirmed. For cases with a lot of lavage fluid and large surgical wounds, in principle, it is recommended to indwell a pelvic drainage tube after the operation.

Precautions after operation:
1. Indwelling the urinary catheter for 24 to 48 hours after the operation; observe the urine color and urine volume.
2. Use antibiotics for 2 to 3 days after surgery, and get out of bed for 12 to 24 hours.

Surgical skills and prevention of complications
1. To raise the uterus cup, be sure to lift the anterior and posterior fornix of the vagina, and lift the uterus;
2. When the isthmus of the fallopian tube, the proper ligament of the ovary and the round ligament are cut, do not get too close to the corner of the uterus, otherwise there will be more bleeding and difficulty in hemostasis;
3. Cut open the bladder and peritoneum at the loose part and fold it, not too low, so as not to damage the bladder; push the bladder down to 2cm below the outer cervix, there is room for suture the vaginal stump, it is not easy to sew to the bladder.
4. When pushing down the bladder, pay attention to electrocoagulation and incision of the bladder and cervix ligament, instead of blindly pushing down to cause bleeding;
5. When using bipolar coagulation or Ligasure to coagulate the uterine blood vessels, it must be close to the cervix to avoid ureteral damage. If necessary, dissect the free ureter.
6. When you cut the vaginal fornix with a ring, you can use a monopolar or ultrasonic knife. When using a unipolar electric hook, you should pay attention to controlling the coagulation time to avoid excessive postoperative leakage. When incising the vagina on both sides of the vagina, pay attention to the vaginal blood vessels. Electrocoagulation first
7. Do not suture the vaginal stump too tightly, otherwise it will easily become necrotic and fall off, causing excessive vaginal exudation after surgery, and even formation of polyps;
8. After the suture, check the wound surface. If bleeding occurs, use bipolar coagulation to stop the bleeding. After the operation, use a speculum to check whether the vaginal stump is seamlessly closed, and whether there are lacerations on the vaginal wall and vaginal opening. 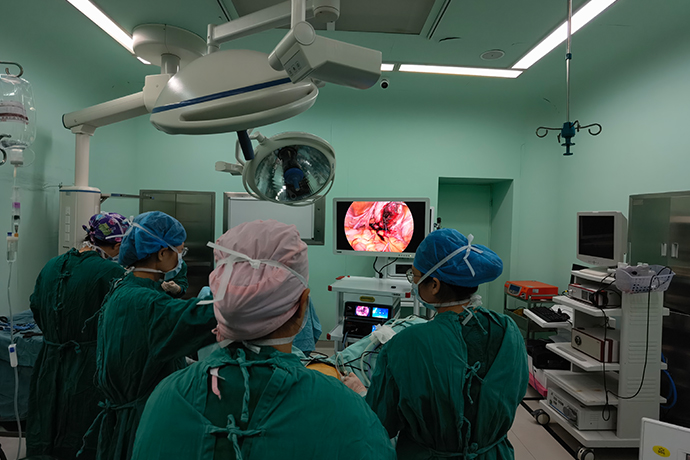